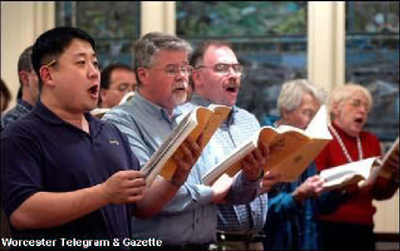 “I love being creative and challenging,” Malama Robbins Collinsworth once reflected during an interview. Then, to emphasize the point, she leaned forward and intently reiterated the word “ challenging.”

With typical warmth and intensity, she was embodying what had made her such a popular, almost revered, music director of the Salisbury Singers. The group itself has faced many challenges over the years, but has long-established a tradition of professional quality performances of a cappella and accompanied choral music from numerous traditions and styles.

Its enduring ambitiousness and longevity will be celebrated at 8 tonight when the Salisbury Singers, with the Thayer Orchestra, presents its 30th anniversary concert with a performance of Felix Mendelssohn’s brilliant oratorio “Elijah.” Robbins Collinsworth presented the chorus with a perhaps unexpected challenge in 1991 when
she moved to Florida.

Malama said to me when she left that she hoped the Salisbury Singers would continue long after,” recalled Naome Fearing, who joined the chorus in 1977. They have, even surviving the shock of Robbins Collinsworth’s death in 1997. There have been ups and downs, but under Michelle Graveline, director of the Salisbury Singers since 1998, the group, with more than 100 singers performing
tonight, is as large as it its ever been.

“Michelle has a great sense of vision, like Malama,” Fearing said.

“I try to promote a friendly and efficient atmosphere,” Graveline said modestly. “People seem to enjoy it.”

The origins of the Salisbury Singers go back to the enjoyment that students who sang in the chorus at Anna Maria College had derived from singing under the direction of the then Malama Robbins.

“ We, as graduates, asked if there was something beyond Anna Maria,” said Margaret M. Tartaglia, who sang in the college chorus and was to become an original member of the Salisbury Singers.

“A number of us had asked her to begin a chorus for us.” Robbins, who had founded the Anna Maria College Chorus in 1968, recalled in another interview that it was her first husband, the Rev. Wallace W. Robbins, who encouraged her to go ahead with the new group.

“He felt at the time that there was indeed a place in the community for another community-based chorus … at that time there was only one … I kept saying I haven’t got time. He said, ‘You know, I think we should,’ ” she said.

The Rev. Robbins, who died in 1988, served as the group’s first president.

“ We started as a small group,” Tartaglia recalled. For its first concert more than 30 years ago, the Salisbury Singers, named after one of Worcester’s most distinguished and famous families, had 19 singers.

“We grew from there,” Tartaglia said. Music reviews of concerts became consistently full of praise.

“One learns to expect fresh programming and high quality performance from the Salisbury Singers,” began one review in The Evening Gazette in 1988. “They delivered just that … ”

The repertoire expanded, and so did the performing venues. “Amahl and the Night Visitors” became a regular Christmas concert for children at Mechanics Hall. There were concerts in Jordan Hall in Boston, and a performance at the Kennedy Center
for the Performing Arts in Washington, D.C., as part of a concert against world hunger. President Reagan was in attendance.

At the group’s peak under Robbins, it had close to 100 members.

“ Malama was dynamically charismatic,” Tartaglia said. “She was also very much a teacher. She educated as she conducted. And she had this ability to inspire in her face and movements what she wanted from the chorus. And she got it from them automatically. I remember magical moments where you were lifted off the earth practically.”

Meanwhile, in 1991 Robbins moved to Florida and married Even Collinsworth III. With her absence, and later her death at the age of 72 (which seemed shockingly untimely for those who remembered her great energy), the Salisbury Singers
may have lost some of its initial momentum. A full time director named after Robbins Collinsworth retired had to be let go after one year because of budgetary problems. A couple of other music directors came and went.

When Graveline became music director six years ago, the group had about 25 singers.

“ I’m pretty pleased with the fact we’ve grown as a group,” Graveline said. “ I got a sense that it was,” she said when asked if the Salisbury Singers had been floundering a
little.

Fearing had that same sense. “We were struggling around for a couple of years,” she said.

She credited Graveline for helping revive the fortunes and the outlook of the singers. “Michelle has her own charisma,” Fearing said. And as Graveline would hope, Fearing finds enjoyment in being a member. As a social worker in private practice, Fearing also finds her own form of therapy, she said.

“ When you’re in a big chorus and you sing with people, it just enriches,” she said.
Graveline noted that the chorus is wide mix of ages and professions. But they all share one thing in common: the music.

From September through May, that means rehearsals virtually every Monday night, barring holidays or snowstorms. “ I try to work on vocal tone. I think that’s the soul of the group,” Graveline said.

“ We’ve been working very hard on ‘Elijah.’ I think we’ve accomplished a great deal with this work. We wanted to do something special for the 30th anniversary and ‘Elijah’ is such a fantastic work, one of the greatest oratorios ever written. It’s a great
way to cap the 30th anniversary season.” And a creative way. And as Robbins
Collinsworth would have hoped — challenging.